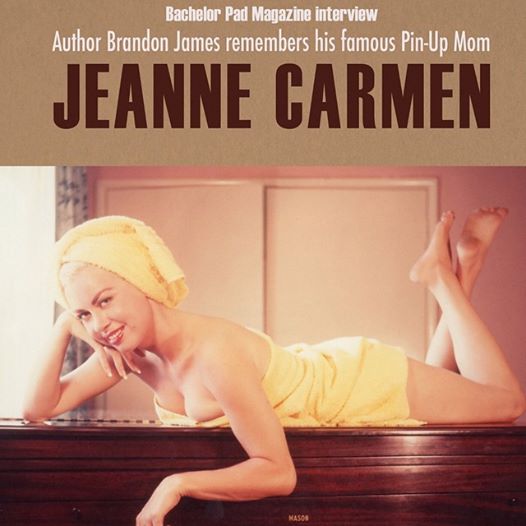 Click this link to check out the Bachelor Pad website and get this copy for your collectors edition.

The article is a Q & A with JEANNE CARMEN’S son BRANDON JAMES about the book he wrote titled JEANNE CARMEN: MY WILD, WILD LIFE As a New York Pin Up Queen, Trick Shot Golfer & Hollywood Actress.

There are 6 pages filled with revealing and often hilarious stories about JEANNE CARMEN and her sexy escapades with stars such as ERROL FLYNN, ELVIS PRESLEY, MARILYN MONROE, JACK BENNY and President JOHN F KENNEDY and his brother, attorney general ROBERT F KENNEDY

You can view a pdf file of the whole article at this link:

Here are a few excerpts:

“…I love the story of how my Mom invited Elvis over to her apartment for dinner and attempted cook him a special southern fried chicken dinner. As a gift, Elvis brought her a sexy French Maid outfit. My Mom put it on and then went over to check on the chicken cooking in the oven.  When she bent over, it was more an Elvis could handle and well.. I guess the chicken ended up burning that night.

On Marilyn Monroe and Jack Benny:

“…Yes, my Mom and Marilyn Monroe went to a steam room on Santa Monica Blvd with Jack Benny. Jack wore a fake beard and dark glasses and a baseball hat so he wouldn’t be recognized.  They did it several times.  Then one time they were all three in the steam room wearing their towels and Marilyn and my Mom were talking and laughing and gossiping when suddenly Marilyn looked down and saw that Jack Benny was visibly excited which was uncharacteristic for him.  Usually he was cool with the girls being naked around him and he always behaved like a perfect gentleman.  However this time, he became aroused and started to pinch my Mom’s and Marilyn’s boobs and butts which they were not having any part of.  Suddenly Jack became belligerent and used explicit language which shocked Marilyn and my Mom.  They decided they needed to cool Jack down a bit so they tackled him and because Jack was older and hardly a muscleman, he immediately fell to the floor and didn’t put up much of a fight.  My Mom took a large eucalyptus branch out of one of the pots in the steam room and began spanking Jack with it while Marilyn had him in a head lock. My Mom scolded him and with each swat she would say “Jack are you ever going to use foul words again?” and Jack would mutter “No.. never.” “Are you ever going to pinch Marilyn’s butt again?” Swat!!!  “No.. never.”  Then Jack faked a hear attack and my Mom and Marilyn freaked out thinking it was real and they rolled Jack over and began to administer CPR and Marilyn started to give him mouth to mouth resuscitation when Jack suddenly burst out laughing.  They all had a good laugh on the way home thinking about that one.

“It was during this period that Marilyn and my Mom lived at 882 North Doheny Blvd in Frank Sinatra’s apartment complex that Marilyn Monroe started her affair with President Kennedy and his brother Robert Kennedy.  Marilyn also started spending a lot of time with Peter Lawford and Peter’s role at the time in the Kennedy family was to get girls for Jack Kennedy.

On Marilyn and Robert F Kennedy:

It was also during this period that my Mom and Marilyn went to a nude beach with Bobby Kennedy in Malibu.  Bobby was at Marilyn’s apartment one day and he noticed a fake beard and glasses laying around and he asked what it was all about.  Marilyn and my Mom told Bobby about how they would go to a steam bath on Santa Monica Blvd with Jack Benny and Jack would wear the disguise so nobody would recognize him.  Bobby started laughing and said if Jack Benny could get away with it he could.  Then Marilyn and Mom dared Bobby to don the disguise and go to the nude beach in Malibu and Bobby being a Kennedy couldn’t resist a dare and went along with it.