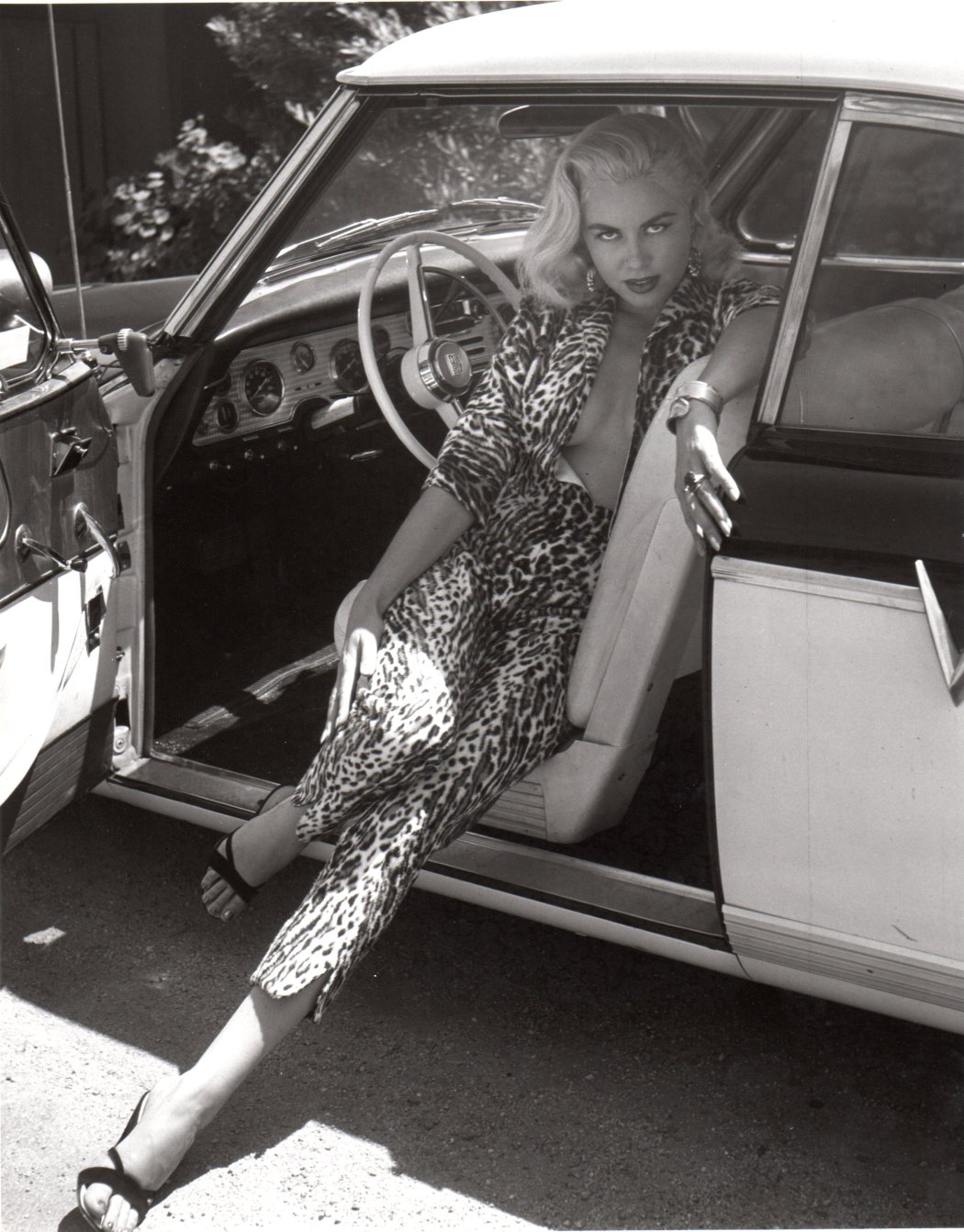 Here is a pdf of the article

Here is a link to the article:

Here is a brief transcript:

In honor of Valentine’s Day, it is the month to remember what we love most. One of my favorite things is pinups! I adore vintage ladies with classic style as well as the golden age of Hollywood, with its glamorous starlets, blonde bombshells and tap dancing leading men. A bygone era in cinema; a time when a confident girl from a rural southern town ran away from home at age 13 to become Jeanne Carmen, pinup queen, model, actress, trick shot golfer and girlfriend to some of the most famous men in Hollywood.

I was recently given what I would consider to be one of the most amazing opportunities in my career: to interview Brandon James, the son of icon Jeanne Carmen. He gave me an unforgettable, two and a half hour telephone interview about his mother’s incredibly unique life with no questions off limits. It was an honor to hear the thrilling, exceptional stories of his mother’s glamorous life. I am thankful to Brandon James as it was an amazing experience to be given the chance to talk with him.

With her own E! True Hollywood Story, her extraordinary life is a who’s who of vintage Hollywood; a real life version of an exciting Hollywood masterpiece: full of fascinating adventures, varied careers, fame, and colorful characters, including mobsters, starlets, athletes and even one of the most infamous presidents in America’s history.

According to her E! True Hollywood Story, Carmen had a very close relationship with Marilyn Monroe and The Kennedys. After Marilyn’s murder, she was told to leave town by Chicago mobster and friend Johnny Roselli who was working for mob boss Sam Giancana. Carmen left the flash of Hollywood for a simple, more domestic life in Scottsdale, Arizona. Much like Bettie Page, Jeanne Carmen disappeared after she left Hollywood. She dyed her hair and had a family life in Arizona where she seemed like just an average housewife. Although little did anyone know she was far from your average housewife.

Fame returned in the 80s when author Anthony Summers tracked Carmen down in Newport Beach, California. He was writing a book called Goddess, about the life and death of Marilyn Monroe. Carmen, being a close friend of the woman whose death has always been surrounded by controversy and mystery, is thought to have been one of the last people to talk to Marilyn Monroe the night that she died. Marilyn called Carmen three times that day before calling Peter Lawford. Carmen was also a friend of The Kennedys and knew about Marilyn’s relationships with both JFK and Bobby.

Among the many notable highlights of Jeanne’s extraordinary life, I would consider her friendship with Marilyn Monroe to be one of those highlights. Jeanne was in fact one of Monroe’s best friends, even during the last days of Marilyn’s life. Jeanne Carmen and Norma Jean met as young women in New York City. Jeanne took acting classes at the home of Lee Strasberg, who would later teach at the famed Actors Studio. At Strasberg’s urging, Jeanne would sometimes sit in on classes at the studio. In 1952, Marilyn was in New York while filming the movie Niagara. Marilyn wanted to be a serious actress and was planning to take classes at the Actors Studio, but was nervous so she stopped in the nearby bar for a drink before the class. Marilyn, in a dark colored, Cleopatra style wig, walked in and sat at the bar next to Jeanne Carmen who was there studying her lines. It was not until later that night when she saw Marilyn’s real hair that she was shocked to realize that the woman she had been talking to was indeed Marilyn Monroe. The two starlets became friends.

The two blonde beauties ended up as next door neighbors later in life. The gals lived in West Hollywood in a 5-apartment complex surrounding a courtyard. The entire compound was owned by old blue eyes, Frank Sinatra. Marilyn Monroe lived there after she divorced Arthur Miller and left New York to return to Hollywood. Sinatra had the apartments for some of his favorite people to stay in, including his on-again, off-again girlfriend Jeanne Carmen. Sinatra’s long time butler and valet, George Jacobs, lived in the apartment complex as well. He later wrote the book, Mr. S-My Life with Frank Sinatra. The book tells of their close friendship and mentions Sinatra’s favorite lady, Jeanne Carmen.

Brandon said that his mother was a modern woman in an old-fashioned time. She approached relationships and dating more like a man. She loved Frank Sinatra, whom she dated for seven years on and off. Sinatra eventually proposed. The flawless pinup with a body that could stop traffic turned the proposal down many times because the charismatic singer wanted an open marriage.

Nearly nine years after her death, Jeanne was the topic of a feature article in a recent issue of Playboy Netherlands. Despite Hugh Hefner’s persistence, she never appeared in Playboy. She was a close friend of Mr. Hefner and over the decades in which they knew each other, he tried to convince her to pose for the popular men’s magazine. Even though she never appeared in a pictorial, she liked Hefner. She said that Hefner was very nice and that he and Playboy Magazine do not exploit women. On the contrary, Hef appreciates their beauty and femininity.

The ‘Queen of the B Movies’ achieved quite the cult following later in life after she reemerged on the Hollywood scene. As Brandon James stated, “Horror fans are unequivocally diehard. Her roles in monster movies would make her a fan favorite until the end of her life.” Talk about a legend; her role in the classic monster movie has been so influential in the pop culture film genre that Rob Zombie even wrote a special cameo for her in his horror film House of a Thousand Corpses. However after the original film was pulled for being too violent, it was picked up by a different studio where it was heavily edited and her part did not make it into the final film.

When I asked Brandon James what people were surprised to know about his mom, he replied that it was her sense of humor. Brandon stated, “People are always surprised by how funny she was. She found humor in anything. She was always out having a good time. She found the best in everyone and she enjoyed making them smile.”

Brandon further explained that his mother had a personality that was like the character Mary in the movie There’s Something About Mary. He said she just had that type of effect on people; everyone that met her would leave feeling a little happier and she enjoyed being that person that made them happier.

She was still active when she was older, appearing in a George Michael music video. Even at the end of her life she stayed busy attending events and conventions where she was a fan favorite. Throughout the years she always had an exceptional presence and beauty about her. Sometimes time can be cruel to a woman’s beauty, but not in Jeanne’s case. Even in her 70s, her beauty remained remarkably stunning.

Jeanne died from lymphoma in 2007, at age 77, in Irvine, CA. Yet her star continues to shine. She recently became the logo of a Canadian barbeque restaurant called Jane Bond Grill. The Calgary, Alberta eatery is using Jeanne Carmen’s image on their menu and in the theme of their restaurant. Likewise, there is a commercial currently on the air featuring a clip of Jeanne Carmen screaming as she sees the monster from the classic movie The Monster of Piedras Blancas. Her son Brandon James has kept her remarkable legend alive. With a website, a book and talks of an autobiographical film, her name has never quite left the Hollywood scene.

If you would like to read more about Jeanne Carmen, check out her new website http://www.jeannecarmen.com. The book, Jeanne Carmen, My Wild, Wild Life as a New York Pin Up Queen, Trick Shot Golfer and Hollywood Actress by Brandon James is available on Amazon, iTunes and Barnes and Noble.