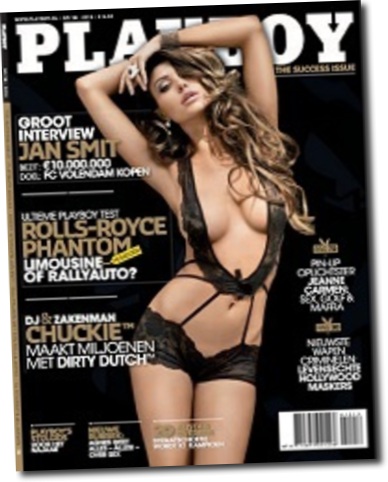 The photo layout is spectacular. it’s was on newstands everywhere in Amsterdam and Holland and the Netherlands.

Here is a link to the magazine cover. You can see Jeanne Carmen’s name on the right side.

Here is a translation of the intro and other highlighted sections in the article.
================
Jeanne Carmen. Sex Goddess. Iconic Pin-up. Brilliant Golf Star. Queen of the B–movies, Mafia Girl and Lover of Elvis Presley. Jeanne Carmen was all that.

A Success Story of a Cunning Blonde Who Was More Sex, Drugs and Rock & Roll than Marilyn Monroe.

Carmen fled in 1953 to Hollywood, where she was soon admitted to the circle of stars who rejoiced in coke, booze and wild sex parties with all its beautiful colors.

This gave Carmen power to the many conspiracy theories that are in essence, that Marilyn was murdered by the Mafia, who wanted to discredit Bobby Kennedy, whose lives and their criminal activities he increasingly impeded.

According to Carmen’s son Brandon James, mobster Johnny Roselli told her later that he had personally killed Sam Giancana because he was secretly in love with Monroe, and he could not bear the fact that Giancana had made it look like Monroe had killed herself.

“Everything I‘ve done, I did at the right time,” Jeanne Carmen said looking back just before her death. “And it turned out fantastic.”

“But my career has gone as it ought to go. A door opened and I was suddenly a famous pin-up. I have lived like a queen. ”

It marked the end of a regal life that cries out to be filmed as a motion picture.

If you want to know all the ins and outs of the turbulent life of Jeanne Carmen then we recommend this book with the impossibly long title JEANNE CARMEN – MY WILD WILD LIFE As A New York Pin–Up Queen, Trick Shot Golfer & Hollywood Actress. Writer Brandon James, the son of Jeanne, left no detail undiscussed in this biography about the life of his mother.

The book is available at all major booksellers. Digital downloads are available on iTunes at https://itunes.apple.com/us/book/jeanne-carmen/id569403432?mt=11